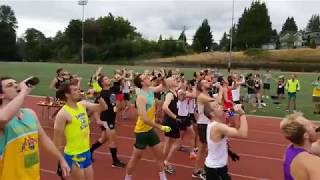 This was the beer mile of the century. It was the first time Sub-5 Minute beer milers matched up. 2 weeks prior to the event, both Josh Harris (4:56.2) and Lewis Kent (4:55.8) broke James Nielsen's WR. The race was very windy, and the course was slow. Organizers held subsequent World classics on the track to comply with the Kingston Rules. Lewis Kent dominated as Josh Harris had a reversal of fortune (The Chunder from Down Under) and James Nielsen was disqalified. Canada won the team title by one point.