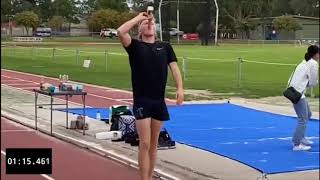 Some friends and I went out to a track to try and get on the top 1000 list. We had to go in the dark of night because it's not exactly legit to be drinking beer on a public school track and we forgot to start the GoPro we had set up to make the thing official; however, I have the link to the screenshots of my Strava and Garmin app results from the run so hopefully that is enough proof. I included an elevation screenshot where you can see that I clearly ran one mile on a track and drank a beer within the regulated distance (as a result of the GPS wristwatch, my elevation goes up slightly as I grab the beer off the table, lowers as I open it, then goes up higher as I chug that motha' with all the will I can muster). The screenshot of my pace clearly shows the pattern of a man running his guts out for a quarter-mile, slowing to a near stop as he desperately chokes down a warm bud light platinum, and then continuing on like the high school state meet is on the line. I think the splits also prove that I did not vomit as there's no interruption in my pacing aside from the beer-chugging portion. You can check my Strava if you'd like to confirm that I am capable of running a much faster mile than 7:02.13 (however I took down the beer mile activity after posting as to not draw attention to the fact that I was drinking on a public school track). Site link is to screenshots.