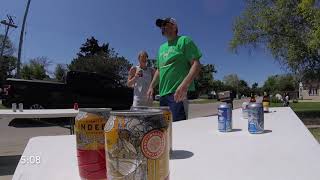 The race had a great showing for only the second go. There were 11 competitors and a good crowd to cheer everyone on. The race was extremely competitive from top to bottom. In first place was Brian Zalewski who pulled away a little on the 4th beer but was followed closely by the beer mile rookies, Riley Kehoe and Freddy Garcia.

This race was so competitve that there was actually a race for the last place position. The race literally came down to an 800m kick to the finish. Andy Turner had a 100m lead but John Streblow was closing fast. Both had puked early in the race which gave Streblow a final 400m to make up the 50m that remained. Turner held on well handing Streblow is second last place finish in a row.

Great race everyone that participated and hopefully we'll see you all in December.