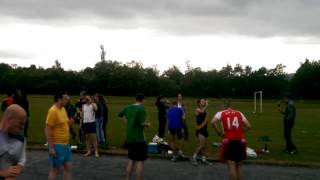 Brown shot out to an early lead which he never relinquished, finishing his rookie mile in a sturdy 8-flat. Woytiuk, running injured, backed off the torrid pace up front and ran a controlled race, comfortably edging the Mikes (and Taylor).

The women's event proved more dramatic, with Benowski and Hoeppner charging to the line side-by-side. In the end, youth carried the day and it was Hardcore Liz who leaned at the tape and won by a leg. Likewise Young and Bratland found themselves locked in an epic battle; Dana's footspeed brought her home only yards ahead of Emily, the better chugger.

Rau and Eshpeter win spirit awards for competing in a prom dress and a pea cap, respectively. Their race may also have come down to the wire had Taylor not been assessed a boot lap for flagrantly vomit-staining lane 6. It should be noted, though, that Taylor exploded from the blocks and took the 100m drunken dash by several lengths in what may have been the performance of the night.

Special thanks to Lauren Brown and Arden Young, the race officials who kept things running like clockwork.