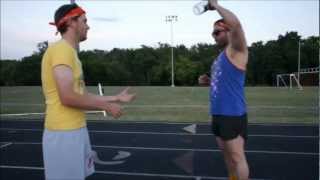 Pat Hanson, currently UNDEFEATED in Missouri is moving to Hotlanta so a farewell beer mile was in order. Pat carried on his winning streak with a pretty good challenge from Tim Cornell (at least in the running portion). Lelande barely avoided being chicked by Jackie with a late-stage 200m effort in the last quarter, but should be ashamed that he still got chicked in the drinking part ☺ Uwe finished his first beer mile and announced he wished it was a Jagermeister mile ? crazy German!! Matt Dreier would have run faster but was too distracted by Sam projectile vomiting in the infield! Josh and Kate finished their first beer miles, LEGEND!! Free Willie Quarter followed....sketchy timing and Steve MacIntyre took too long to get his pants off and started late. Tim, Lelande, Steve were top 3.