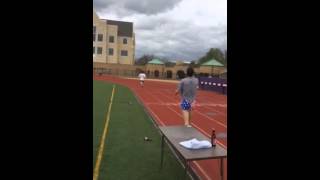 Nor could this have been possible without the awed and awesome spectators: Ari Gold, showed up, did not compete; the B Factor, coaches, beer mile is not in his repertoire; C, showed up, felt it best to watch, not participate, maybe next time, maybe; J, flabbergasted at the event, never heard of such a thing before, said of the proceedings “this is crazy”; the Ghost, prefers to enjoy his beer, not chug it; R, according to rumor: is considering abandoning tempo runs in favor of beer miles.