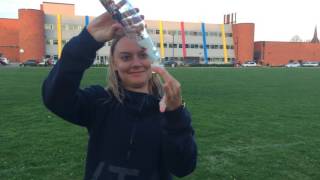 Quite possibly the most southern beer mile in the history of the world.

It was a cold, windswept, and snowy afternoon that greeted the participants of the first ever Falklands Beer Mile. This was likely the southernmost ever recorded attempt at this international gustatory athletic event in the the history of mankind and a first for the Falkland Islands. Internationally there are over 90,000 entries in the sports and over 5000 races at least that have been completed worldwide in what is the premier event in digestive athletics. The sports origins are unknown with original runs being held in Florida and New England in the USA and Hash House Harrier Events in Indonesia. Ontario, a small province in Canada, has also been known to have been an early adopter of the sport. The earliest documented races were in the 1980s.

The brainchild of Dr. Alvaro Pemartin during an social event in the city of Port Stanley it was organized by Paul Dhillon with incredible support from Mr. Colin Summers in the Public Works Department and Vice-President of the Stanley Sports Association which provided the stunning venue. The adverse weather conditions that befel the island the night before the event caused great worry and consternation in fear that the historic event would not occur. The participants and the many that came to witness this event were however not dissapointed.

The community support for this event extended from the government to the private sector with Mr. Jeff Halliday, owner and operator of one of the most remote brewery's in the world on hand to not only view the race but to present the top three participants with a commemorative pint glass from his own brewery. His support added greatly to the motivation for the runners and to athe allure of the event. Sarah Keegan and Hugh-Becks participated by ensuring international standards for the race were maintained and race photography was done by Dr. Stronczak.

A break in the fierce easterly snow storms allowed for a stunning sunshine start to the race. Angus Turnbull of the UK took a commanding 100 yard lead through the first lap of the 4 lap circuit. In second place for the first two circuits was Paul Dhillon who maintained a consistent pace throughout the first 3 circuits. Alvaro, struggled in the first two circuits but was employing a tortoise strategy which proved to be successful in later stages of the race. Angus suffered from the effects of his bright start with 2 periods of eructation inbetween circuits 3 and 4 and had to complete a penalty lap. Although the winners had been decided at that stage in a true testament to sportsmanship Alvaro and Paul completed the penalty lap with the eventual 3rd place finisher Dr. Turnbull.

A donation will be made to the Cancer Support and Awareness Trust for this event.