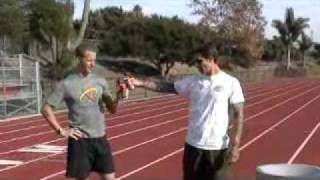 October 25, 2008, Chicago, IL -- It was a raw Fall Chicago day, and then John Wiberg started warming up, Simon Trude took his pants off, and the Beer Go Home Gary Beer Mile was on, much to the confusion of several non-participants who were just trying to get a workout in at the track near Chicago Ave. and Lakeshore Drive.

If you're reading this, then you probably know the rules: one beer, one lap, another beer, another lap, etc. until you've done one mile and drank four beers. The Chicago Police Department took an interest in the race just after the first lap was completed, but two dudes with loaded weapons were no match for the Well-Fit Elite team and friends.

Thirteen racers started, but only eight finished, matching the attrition rate of the Ironman World Championship in Kona, Hawaii. Notable flame-outs included pre-race favorite Kevin McCarthy, Well-Fit head coach Sharone Aharon, and Noelle Willhite who took about two minutes to finish her initial beer and kind of took herself out of the running from the start.

In the end, Simon Trude crushed the Illinois Beer Mile record with an official time of 6:11, and Kristen Wrede crushed the female record with a time of 7:36, beating the old mark by almost two minutes. Thanks to the 13 racers, the approximately 20 "race volunteers," and the Chicago PD, who proved to everyone watching that you are never too old to make an ass of yourself.