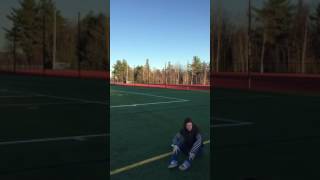 I am Kasper Ligneel, 4th year engineering student in Ghent, track runner and beer enthousiast. Oh yeah, and last week, I ran a beer half marathon.

I came into contact with the concept of beermiling a little over two years ago. I am a track runner and beer enthousiast myself, so I could appreciate the combination of heavy drinking and running very quickly. I was amased as I saw runners beat the world record time and time again and wondered at how they were able to do it so enormously quick (I still haven't figured that one out by the way). The current world record (4'34" by Corey Bellemore) is even below my current personal best on the mile without beer (4'37"). I can be pretty sure I wil never even get close to that one. I really want to do a beermile, though, and think I will in the near future (how about that for a new years resolution!)

But wanting to win at least something is what drove me to the 'Rule variations' list and in that margin I found a fair share of challenges. The beer half marathon seemed like a very nice way to start. I was at least somewhat confident that I could do it, but my friends were, to use a eufemism, worried that I would even survive the effort. So one night when I had had a few beers (because no great story ever started with someone eating a salad) I promised I would do one this semester.

So I picked a date, made a facebook event and invited some friends who were willing to sacrifice 2 hours of their lives to cheer me on in near freezing temperatures while I was getting very drunk and running very quicky (hopefully). I invited some pacemakers as well to guide me through the last few drunken miles, and it turned out quite a few people were willing to run along. Nelis Goeminne and Jim Declerck paced me perfectly during the first half and Jelle De Wispelaere did the same thing in the second half. Jim even accompanied me during the drinking, his plan was to stop after 6 miles (he had only brought 6 beers) but after 5 beers, the crazy son of a bitch decided he would match me on the whole distance. Someone quickly ran to the store (thank god you can buy beer almost everywhere here in the university town of Ghent) and bought the remaining 7 beers so he could continue seamlessly. In the end, he was not able to keep up with my pace, but he did finish the whole ordeal and did so way below the previous world record. As you can see in the video, after I had finished, I even ran along with him during his last mile (which seemed like a good plan at the time, still my legs somewhat regretted that decision the next day when I went for a jog of about an hour).

Specifications:
The lap in the Citadelpark in Ghent was about half a mile, so I had to drink every two laps. When consulting Google maps, the lap seemed 810 meters (see link below), so after 26 laps, this would result in 26 * 0.810 km = 21.060 km. Since a half marathon is 13.2 miles or 21.098km I would have to run an additional 38m at the end. But our (more reliable) polar GPS watch confirmed the lap to be 815 meters, which would result in 26 * 0.815 = 21.190 km. As this is even slightly over the correct distance, I could start and finish in the same spot, which sure was quite nice for the fans.
For beers, we used European standard cans of 330ml, which are slightly less than the standard 12 oz. (or 355ml) cans used in the US, but it's a very small difference and 12 oz. cans are impossible to find here in Belgium. I, myself drank 13 cans of Maes (see link below, one has to be over 18 to enter the site), which has an alcohol percentage of 5.2%. Jim first drank 6 cans of Stella Artois (link below) with an alcohol percentage of 5.2%, than 6 cans of Jupiler (link below) with an alcohol percentage of 5.2% and finished with one can of Maes (the same sort I drank).

The last 2 miles of the event were also livestreamed on facebook (link below), people are however talking in Dutch, so most of you will probably have trouble understanding it. It was also picked up by a Dutch student magazine (Guido, link below), as it is a written article, this should be easier to translate. Apart from the facebook event, we did not really have a race site. When I created the event, it was not a public one, and I cannot change this anymore, so I doubt most of you will be able to see it, for which I am sorry.

To conclude: this has been a great experience. People told me I would die, I read some things online about someone having a multiple day hangover, telling me that it was a horrible experience, but frankly I quite liked it. I can definitely recommend going for a run with some friends after you've had a couple of beers (not neccesarily 13), it is quite some fun. Next semester, I certainly plan to do a regular beermile for a change, but we also plan to try to beat some more records of the 'rule variations' list. I would like to attack the 3000m wodca steeple chase and Jim and some friends (maybe including me, maybe not) plan to do the 4x40 challenge. Keep your eyes on the 'Rule variations' list, because we plan to be all over it! :)